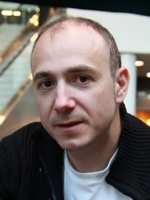 Dejan Aničić, born in 1969 in Tübingen, studied Classical and Ancient Studies and Theology at the University of Belgrade. He then studied at the Department for Byzantine Studies at the University of Athens and later, Classical Philology at the University of Zurich. He has worked as a translator, author and editor for cultural and trade journals since the Nineties. He has translated many texts from English, French, German and Modern Greek into Serbian. In the last few years he has, in particular, published translations of philosophical and theoretical works (including Gilles Deleuze, Michel Foucault, Niklas Luhmann, Peter Sloterdijk). Since 2005 he has worked for the Serbian weekly journal, NIN. He is responsible for the book series Allographien and Panellinion at the Karpos publishing house.