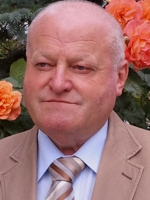 Božidar Brezinščak Bagola, born in 1947 in Vrbišnica, Croatia, studied theology in Zagreb and philosophy in Belgrade. Since 1978 he has been living in Hum na Sutli, Croatia, where he worked as an editor for an in-house magazine and HR manager, and later went on to become the director of the cultural centre and mayor of the city. He is the author of seven books of poetry, three novels, two volumes of short-stories, three compilations of journalistic writings, and two volumes of travel journals and essays. He has translated eighteen books from Slovene into Croatian, among them those by Anton Martin Slomšek, Edvard Kocbek, and Vinko Möderndorfer, and fifteen books from German into Croatian, for example by Viktor Frankl, Romano Guardini, and Hildegard von Bingen.