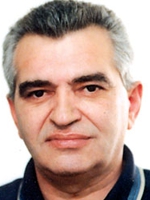 Milan Banov was born in 1952 in Skopje. Since 2008, he has been the head of department at the National and University Library St. Clement of Ohrid in Skopje. During his career as a journalist, he established two Macedonian daily newspapers and received numerous awards for his work. He is now a columnist for two renowned dailies, “Dnevnik” and “Nova Makedonija”. Banov writes screenplays and has three collections of columns and essays published. He translated many works from languages of Southeast Europe, among other Danilo Kiš, Borislav Pekić, Milorad Pavić, and Daša Drndić.