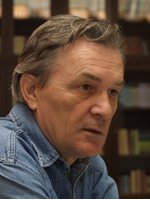 Dimitar Baševski, a writer, translator, and publisher, was born in 1943 in the Macedonian town of Gjavato near Bitola. Over many years he worked as a journalist, amongst others as a foreign correspondent from Athens, and later on as a publisher. He is the current chief editor of the Slovo Publishing House. Between the years 2000 and 2006 he was the president, then honorary president of the Macedonian PEN Centre. His books have been translated into many foreign languages. For his publications he has been awarded many of Macedonia’s most prestigious literary awards, including the ‘Novel of the Year Prize’ for his novel Bunar (The Well) in 2001. Baševski moreover translates from English into Serbian. For his work as a Serbian translator he received an honour of the Serbian PEN Centre in 2015.