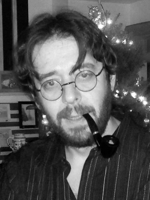 Octavian Blenchea, born in 1975 in Transylvania, studied Romanian and French languages and literatures in Bucharest. He concluded his studies with a final paper on the cultural renaissance of the Balkans after the breakdown of the Ottoman Empire. Additionally, he studied Macedonian and Albanian languages, literatures and cultures in Skopje and Tirana. He started his journalistic career at Baricada, the first independent media corporation after the fall of communism in Romania. Since 1996, he has been translating from Albanian, Macedonian, French and English into Romanian. He has translated, among other, works of Gaston Bachelard, Franck Pavloff, Mitrush Kuteli, Fatos Arapi, Lidija Dimkovska and Goce Smilevski. He currently lives and works in Montreal in Canada.