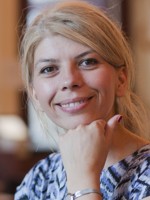 Marica Bodrožić was born in Dalmatia, now Croatia, in 1973. She has lived in Germany since 1983 and writes poetry, novels, short stories and essays. She has received numerous awards and grants for her books including the Literary Award from the Academy of the Arts in Berlin and the German Language Cultural Prize. Marica Bodrožić works as a freelance writer and translator in Berlin. She has translated works byIgor Štiks (Elijahova stolica), Mirko Kovač (Grad u zrcalu) and Ivana Simić (Hotel Zagorje) from Croatian, and Julia Leigh (Disquiet) from English.