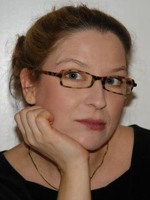 Susanne Böhm-Milosavljević, born in 1964, studied Slavic and German at Ruhr University, Bochum. In her thesis she examined the phenomenon of the war in Serbian fiction between 1990 and 2001. Since 2008 she has interpreted and translated from Serbian and Croatian and has translated texts by Srđan Valjarević (poems, fragments of novels), Igor Štiks (story: Auf gepackten Koffern) [On Packed Suitcases] and Goran Petrović (stories: Bilder einer Ausstellung [Pictures of an Exhibition], Die Sinne  [The Senses], Sein Nächster [His Next One]; the novel: Die Villa am Rande der Zeit) [The Mansoin at the Edge of Time] into German. She is one of the founding members of  SO-Übersetzen e. V. and lives and works in Gelsenkirchen.