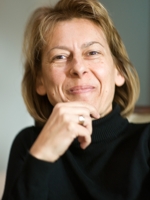 Maja Bojadžievska was born in 1963 in Skopje, Macedonia. She is Professor at the Chair for Comparative Literature at the “Sts. Cyril and Methodius University” Skopje, and is a member of the Macedonian PEN Centre. Bojadžievska has translated several books on literary criticism. She has also translated works by Gilbert Durand, Jacques Derrida, Gilles Deleuze, Julia Kristeva, Migelna Nikolchina, A. R. Radcliffe-Brown, Jean-Pierre Vernant and Dubravka Ugrešić into Macedonian.