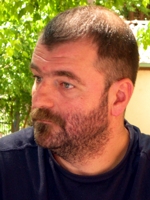 Ahmed Burić, born in 1967 in Sarajevo, studied at the Faculty for Political Sciences, specialising in Journalism. He is a poet, translator, literary critic, editor, screenplay writer and journalist. His works have been translated into English, French, Czech and Slovenian. He himself translates from Slovenian into Bosnian. In addition to numerous translations for newspapers, magazines and events he has published Oprosti poezijo by Esad Babačić (Obzor Međugorje, 1999) and Čefuri napolje by Goran Vojović (VBZ Sarajevo, 2009). His most important works as an author include Bog tranzicije (2004) and Posljednje suze krvi i nafte (2010).