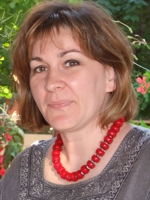 Oana-Nora Căpățână was born in 1968 in Craiova, Romania. She studied German and English languages and literatures in Bucharest and was at first German and English teacher in her hometown. In 1992, she moved to Sibiu where she has been teaching at the Faculty for Philology and Theatre Art at the Lucian Blaga University of Sibiu since 1994. She received her PhD in 2005 for a thesis on aspects of translations of literary comicality from German to Romanian. Oana-Nora Căpățână writes scientific papers on linguistics and translation critique and translates from German and English. From German she has translated works by authors such as Erich Maria Remarque and Karin Michaelis and from Romanian-German authors, for example Walther Gottfried Seidner and Joachim Wittstock. Her most recent translation project was the novel In Zeiten des abnehmenden Lichts by Eugen Ruge, which she finished in 2013.