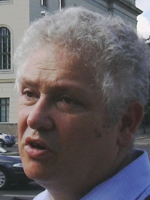 Andrei Corbea-Hoişie was born in 1951 in Iaşi. He is Professor of German Studies at the Alexandru Ioan Cuza University Iaşi and was the Humboldt grant holder at the University of Constance and Holder of the Blaise Pascal Research Chair of the Foundation of the École Normale Supérieure Paris. He was guest professor at the universities of Paris 8, Siegen, Freiburg, Bucharest and Vienna as well as at the École Pratique des Hautes Etudes (Sorbonne). He was also a Fellow of the International Research Centre of Cultural Studies in Vienna. He is a member of the Academy of Useful Sciences in Erfurt, the Johann Gottfried Herder Prizewinner for 1998 and the Jacob and Wilhelm Grimm Prizewinner for 2000. In 2001 he was appointed Honorary Doctor of the University of Constance. He is a member of the Board of the International Association of Specialists in German Studies and was Vice-President of the Central European Association of Specialists in German Studies from 2003 to 2007. Andrei Corbea-Hoişie is the author of numerous works in the area of German literature of the 19th and 20th century, of literary theory, aesthetics and the comparative history of literature and culture. From 2005 to 2007 he was the Romanian ambassador in the Republic of Austria.