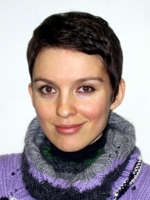 Born in 02/05/1977 in Tirana, Albania. Studied German at the Foreign Languages Faculty in Tirana and International Relations at the Kent University at Brussels, Belgium.

At the end of the 1990’s she worked as a translator and interpreter, mainly in German and French. From 2000 to 2002 she was the local project co-ordinator /interpreter/translator for the “Project for Promotion of Business Professional Training in Albania” for the German Society for Technical Co-operation (Gesellschaft für Technische Zusammenarbeit (gtz)). At the same time she produced and presented the radio programme “Angels and Devils” on the Albanian “Radio RASH”. From 2002 to 2005 she worked as a correspondent for the Albanian private TV station “News 24” in Tel Aviv, Israel. After studying for her Masters at Kent University she worked as assistant to the Head of the Permanent Delegation of Albania to the EU in Brussels, Belgium. Since 2007 she has lived in Vienna and has now brought out her first literary translation from German to Albanian, the novel “Tears Laugh” by Andrea Grill.