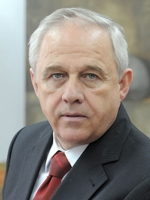 Branko Cvetkoski, born in 1954 in Slatino, studied Philology in Skopje. He has worked as a journalist, editor and chief editor for various journals and publishing companies in Macedonia, was Director of the National Theatre and is a co-founder of the “Balkanika” literary foundation. He currently runs the  “Brakja Miladinovci” library in Skopje. Branko Cvetkoski is a member of the P.E.N. centre, of the Macedonian Writers’ Association and an Honorary Member of the Union of Bulgarian Writers. He has published numerous volumes of poetry, reviews and essays and has received many awards. His books have been translated into 15 languages. He himself has translated around 30 books from Serbian, Bulgarian, Croatian and Russian.