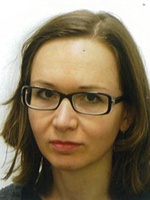 Jelena Dabić, born in 1978 in Sarajevo, lived in Innsbruck from 1992 and has lived in Vienna since 2004. She studied German Philology and Russian in Innsbruck and in Vienna completed a teaching course for German and Russian, where today she works as a teacher for German as a foreign language, translator and reviewer (House of Literature, Vienna). Jelena Dabić took part in several translator seminars in Vienna and Lower Austria, as well as in the 4th German-Russian translator workshop 2007 near Tula (Russia). Translations: Mein lieber Petrović (original title: Dragi moj Petroviću) [My dear Petrovic] by Milovan Danojlić (jointly with Mascha Dabić) and Verwandtschaft (original title: Rodbina) [Relations] by Dragana Mladenović.