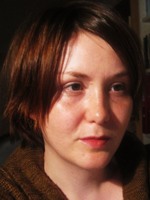 Mascha Dabić, born in 1981 in Sarajevo, has lived in Austria since 1992. She studied Translation Science (English and Russian) and Political Science and works in Vienna as a translator and conference interpreter. Since 2010 she has also been a journalist at  daStandard.at. Mascha Dabić translated the novel Izlaženje by Barbara Marković (Ausgehen, 2009) [Going Out], the novel Neznanom junaku by Sreten Ugričić (An den Unbekannten Helden, 2011) [To the Unknown Hero Warrior] and the novel Dragi moj Petroviću by Milovan Danojlić, in co-operation with Jelena Dabić (Mein lieber Petrović, 2011) [My Dear Petrovic]. She has also translated texts by Vladan Matijević, Srđan Valjarević, Jelena Mijović, Jelena Lengold, Marija Knežević and others.