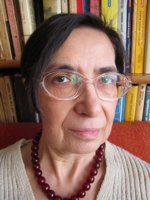 Gabriela Danțiș, born in 1947 in Bucharest, studied Romanian language and literature at the University of Bucharest (1965-1970) and obtained her PhD with a thesis on Romanian bucolic poetry in 1999 from the same university. From 1970 to 2005, she was an editor in publishing houses Univers and Polirom. Since 2005, she has been active at the G. Călinescu Institute for Literary History and Science of the Romanian Academy. She worked there on projects like the General Lexicon of the Romanian Literature (Vol. I-VII, 2004-2009, Romanian Academy Prize) and the Lexicon of the Romanian Literature (I-II, 2012). She has also been an editor of a lexicon of foreign writers and has published many academic works. From German, she translated novels by Theodor Fontane, Christa Wolf (Medea), Thomas Bernhard (Alte Meister, Auslöschung), non-fiction books and essays (among other C.G. Jung and Joachim Köhler). She is a member of the Romanian Writers’ Association and a bearer of cultural merits order of Romania (2009).