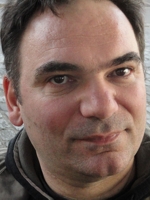 Dragoslav Dedović, was born in 1963 in Zemun (Serbia) and grew up in Bosnia and Herzegovina, studied journalism in Sarajevo and Cultural Sociology in Belgrade. From 1990-1992 he was Chief Editor at a publishing company in Tuzla. As a journalist and writer he campaigned against ethnic nationalism and military force. Since 1992 he has lived in Germany, where, as a grant holder of the Heinrich Böll Foundation he successfully completed the interdisciplinary Master of Arts in “European Studies” in Aachen and from 1999-2006 worked as Editor with Deutsche Welle. He subsequently ran the Belgrade office of the Heinrich Böll Foundation. He has been living in Germany again since 2009, working in Bonn as a consultant for the Western Balkans in the Forum of the Civil Peace Service. He has received many awards for his work as a writer. Dragoslav Dedović translates literary texts from German and with Dagmar Vohburger into German.