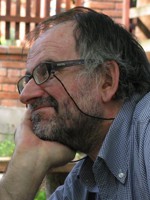 Milan Đorđević, born in 1954, is a poet, writer, essayist, and translator. He received numerous prizes for his works: Borislav Pekić Prize in 1998, Vasko Popa Prize in 2005, Vladislav Petković Dis Prize in 2007, Branko Miljković Prize in 2009 and Desanka Maksimović Prize in 2013. His texts have been translated to English, German, Slovak, Romanian, Hungarian, Portuguese, Polish, Macedonian, and Slovenian. Milan Đorđević translates from Slovenian and English. For his translations, he received the Oton Župančič award of the Slovenian Writers’ association in 1989.