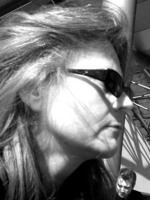 Brigitte Döbert, born in 1959, has been a full-time translator of fiction and non-fiction into German since 1995, including several novels by Miljenko Jergović and texts by Dževad Karahasan, Bora Ćosić and many others. She began her career in translation  (seeing nothing against it), during two years as a grantholder in Zagreb and Belgrade at the end of the 1980s (Mainz-Zagreb town twinning partnership /DAAD) with essays for the foreign edition of Filozofska Istraživanja. Brigitte Döbert studied Philosophy, African, Bibliology and German (degrees: Master’s degree, Doctorate), she then worked as a publishers’ reader for a short time. She is a founding member of SO_Übersetzen e.V., an association for the promotion of literature from Southern Europe.