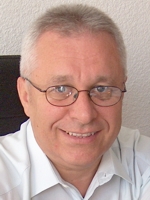 Marius Dobrescu, born in 1951 in Braila (Romania), studied Albanian Language and Literature in Tirana. From 1990, he was the Director of the National Library, and worked for the Romanian media. Since 2001, he has published the magazine of the Albanian Association in Romania Prietenul albanezului. As a translator, he is especially devoted to the works of Ismail Kadare. He has also translated Fahri Balliu, Teodor Laço, Ramiz Gjini, Ermir Nika and Stefan Çapaliku. He received the Romanian author association’s award in 2006 for his literary works, and in 2006 he received the “Silver Feather”. The association of Albanian-American authors recently awarded the “Golden Feather” to him, and the Albanian Minister of Culture, Xhaferri, declared him to be Romania’s ambassador of Albanian culture in 2010.