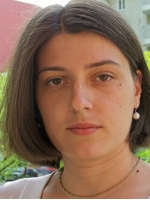 Iulia Dondorici, born in 1979 in Târgoviște, works as a journalist, translator and moderator. She studied Romanian and English philology in Bucharest as well as German language and literature in Berlin. She is currently doing a Ph.D. on the theme of “Body images in the Romanian literature of modernity”” at Humboldt University in Berlin. She translated Herzzeit. Briefwechsel from German into Romanian, has written numerous articles about Romanian and German literature of the present and is Editor of the volume, Rumänien heute [Romania today] (Passagen Verlag, 2011). She has lived in Berlin since 2001.