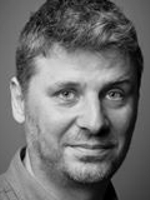 Mircea Dragoman was born in 1975 in Braşov. He studied theatre acting and journalism in German at the West University of Timişoara. From 1993 to 2002 he worked at the German State Theatre in Timişoara. Since 2002, he is an actor in the Jewish State Theatre in Bucharest. He translated from German the works of Peter Handke (In einer dunklen Nacht ging ich aus meinem stillen Haus), Ingo Schulze (33 Augenblicke des Glücks) and Hans Fallada (Kleiner Mann, was nun?).