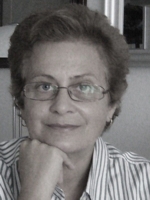 Janina Dragostinova, born in 1962 in Varna (Bulgaria), studied German Language and Literature and Film Science in Sofia. She is a translator, author and freelance journalist. In 2006 she took part in the translators’ workshop at the Literary Colloquium Berlin, where in 2011 she also received the “Schritte” grant. Her translations from German have included works by Inka Parei, Juli Zeh, Wladimir Kaminer, Martin Pollack, Pascal Mercier, Daniel Kehlmann, Ilija Trojanow and the autobiographical books of Rainer Werner Fassbinder, Wim Wenders and Volker Schlöndorff.