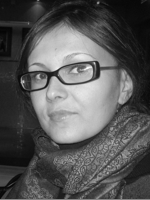 Irma Duraković, born in 1983 in Sarajevo, studied German and Film Science in Sarajevo and Vienna. She is currently working on her thesis about “Dreams of modernity. Dream concepts in German-speaking literature and film around 1900”. Her scientific interest is directed towards German and Austrian literature of the 19th and 20th century, literature and visual art as well as towards film history and theory. In addition to the publication of scientific works Irma Duraković also devotes herself to literary translation from German into Bosnian. Until now she has translated a collection of Bosnian folk tales, a story by Hugo von Hofmannsthal and the novel Nachts unter der steinernen Brücke (title of the English translation: By Night under the Stone Bridge) by Leo Perutz.