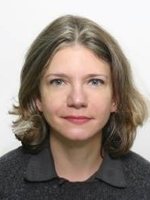 Iva Fidancheva, born in 1978 in Skopje, studied German in Skopje and Marburg. From 2002 to 2008 she worked as an Assistant Professor in German at the M&M College and at the FON University in Skopje. In 2007 she was at the Literary Colloquium Berlin as the ‘Schritte’ grant holder. In 2008 she accepted a grant at the   “Laboratory of the Enlightenment” graduate school at the Friedrich Schiller University in Jena. Iva Fidancheva translates from German into Macedonian and vice versa. In 2006 the Macedonian Literary Translators’ Association distinguished her translation of the book Das Glasperlenspiel (title of the English translation: The Glass Bead Game) by Hermann Hesse as the best translation from German into Macedonian. In addition to Hermann Hesse her translations have included works by Günter Grass, Gottlob Fregge, Sigmund Freud, Bernhard Schlink, Peter Stamm and Sibylle Berg.