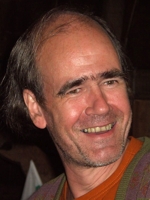 Thomas Frahm, born in 1961 in Duisburg, studied Geography and worked for the literature office in Bonn. Later, he became a publisher of literature by migrants. Since 2000, his life’s focus has been on Bulgaria. He has written for radio stations, journals, various regional newspapers and national newspapers such as FAZ, NZZ, WELT, ND, Süddeutsche and Tagesspiegel. Since 2004 he has translated scripts, plays, and especially novels by Vladimir Zarev, Léa Cohen and Angel Wagenstein from Bulgarian to German. He has received sponsorships and grants from the Robert Bosch Foundation and the German Translator Fund.