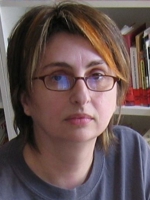 Gergana Fyrkova was born in 1965 and lives in Sofia. She studied German language and literature at the University of Sofia and for two semesters at the Humboldt university of Berlin. She published her first translations to Bulgarian (Film als Kunst by Rudolf Arnheim and Von Caligari zu Hitler by Siegfried Kracauer) already during her studies. Since then, she has been translating literary and film translator, film critic and journalist. Her focus as a translator is on the literature of the early 20th century (Franz Kafka, Robert Walser, Joseph Roth), literature of modern immigrant writers (Ilija Trojanow, Dimitré Dinev) and contemporary German literature (Clemens J. Setz, Marion Poschmann). She is a lecturer at the Faculty of classical and modern philology of the St. Kliment Ohridski university of Sofia. She is a member of the Bulgarian Translators’ Union, the Association of Bulgarian Filmmakers, and the Bulgarian Journalists’ Association. She is a co-founder of the Association of Germanists in Bulgaria and a member of the European Translators Collegium in Straelen.