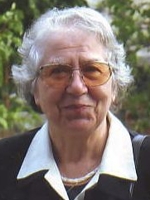 Frossina Georgieva Parashkevova, born in 1940 in Sofia, studied German Language and Literature at the St. Clement of Ohrid University in Sofia. From 1964 to 1967 she lived in Leipzig and worked as a Secretary with Modern Languages at the Karl Marx University. She then worked as a German correspondent in an export management company and as a translator at the Sofia-Press press agency. Since  1983 she has worked as a sworn translator in the company Sofia Inter. Frossina Georgieva Parashkevova’s translations have included: Das Verschwinden des Schattens in der Sonne (title of the English translation: The Shadow Disappears in the Sun) and Bindungen [Connections] by Barbara Frischmuth, Die Geschwister Oppermann (title of the English translation: The Oppermanns] by Lion Feuchtwanger, Der jugendliche Gott [The Youthful God] by Alma Johanna Koenig and Der Meister des Jüngsten Tages (title of the English translation: The Master of the Day of Judgement) by Leo Perutz.