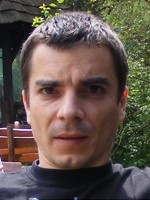 Lorin Ghiman, born in 1977 in Baia Mare (Romania), studied environmental protection technology in Baia Mare and Clausthal-Zellerfeld (Germany) and Philosophy in Cluj-Napoca, where he is currently doing a Ph.D. Since 2005 he has taken part in several translation projects from German. These have included his co-operation in the Romanian translation of the following works: Topologie der Aura [Topology of Aura] by Boris Groys, Die Kirchenunion in Siebenbürgen [The Union of the Churches in Siebenbürgen] by Ernst Christoph Suttner and Ursprung des deutschen Trauerspiels [The Origin of the German Tragic Drama] by Walter Benjamin.