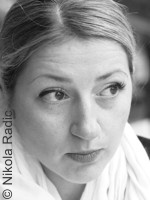 Maria Glišić, was born in 1981 in Hanover (she grew up alongside the Hanover/Munich-Belgrade route), reflected on matters and made mistakes before, in the end, deciding to study German Language and Literature at the Universities of Belgrade and Osnabrück. During and after her studies she was concerned with the (didactic) spread of peculiarities of the German-language cultural area (ostensibly) in Serbia, which she perceived as a personal duty. This has also involved her, already for many years, in translating in the focal areas of politics, philosophy and literary (history), as well as history in general, (or, “Coming to terms with the past”) from German into Serbian and vice versa: for several magazines, authors and internet portals in the region (e.g. Peščanik), as well as for the “Kikinda Short” short story festival.   Since 2011 she has translated for the “Laguna” publishing company (started by Daniel Glattauer), which also published Uwe Timms’ autobiographical novel Am Beispiel meines Bruders (title of the English translation: In My Brother’s Shadow: A Life and Death in the SS). She is currently concerned with the current political situation and its environment and is passionate about translating fiction. For the last few years she has worked as project coordinator at the Heinrich Böll Foundation.