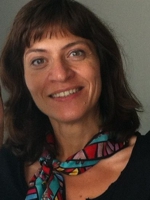 Monica Livia Grigore was born in 1971 in Bucharest. She grew up in a bilingual family and had contact with German already as a child while she also learnt German in school. She studied at the Polytechnic university of Bucharest and taught German at a secondary school. Since 2002, she has been a freelance translator. She translated numerous books of various text types from German, including  Die dichtende Königin Carmen Sylva. Literatur im Dienst der Krone by Silvia Irina Zimmermann, Tschick by Wolfgang Herrndorf, Der Hals der Giraffe by Judith Schalansky, In Wahrheit wird viel mehr gelogen by Kerstin Gier, and children’s books Das Handbuch für Prinzessinnen by Hilke Rosenboom, Pixi series, Pixi Wissen etc.