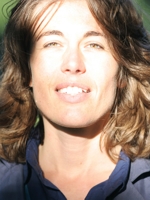 Andrea Grill was born in in Bad Ischl (Austria) and studied in Salzburg, among other places. She obtained her doctorate from Amsterdam University, where she specialised in the evolution of endemic butterflies in Sardinia. Having resided in Tirana, Cagliari (Sardinia), Neuchatel  and Bologna, she now lives in Vienna. Andrea Grill publishes lyrics, stories and novels, most recently Das Schöne und das Notwendige [The Beautiful and the Necessary] (Otto Müller publishing company, Salzburg) and translates from Albanian and Dutch. Her translation of the novel Milchkuss [Milk Kiss] by Mimoza Ahmeti appeared in 2009, and her translation of the poetry anthology Kinder der Natur [Children of Nature] by Luljeta Lleshanaku appeared in 2010.