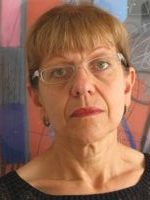 Darja Haralanova, born in 1957 in Pleven, studied literary translation at the Maxim Gorki Literary Institute in Moscow. In the 80s she worked as an editor for a literary magazine for Russian literature named Fackel. Apart from working as a translator she also founded the Aquarius Publishing House, which she still runs today. Amongst others she has translated the following books from German into Bulgarian: Du bist nicht so wie andre Mütter by Angelika Schrobsdorff, Kokoschkins Reise by Hans Joachim Schädlich, the selected poems Grüner Mond by Erich Arend, Vergänglichkeiten by Elisabeth Borchers, Wintermusik by Sarah Kirsch, the selected fairy tales Sieben Geschichten eines weisen Raben by Ludwig Bechstein, and Das unsichtbare Königreich by Walter Kahn, as well as non-fiction books on child psychology, such as Der kleine Tyrann by Jirina Prekop.