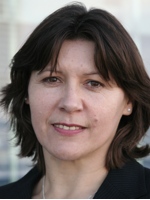 Silvija Hinzmann, born in 1956 in Čakovec (Croatia), has lived in Germany since 1970. After commercial training and further education at night school she worked in several commercial enterprises and in public service. In 1980 she began to translate and interpret, firstly voluntarily, for social institutions and authorities. In 1993 she passed the state examination at the University of Darmstadt and set herself up as an independent specialist translator and interpreter as well as a literary translator for Croatian, Serbian and Bosnian. She has also been an author since 2003 and has published numerous short thrillers and the detective story Die Farbe des Himmels [The Colour of the Sky] (2005). She is also the co-author of several anthologies. Her translations include works by Živko Skračić, Radoslav Petković, Sanja Lovrenčić and Marija Knežević.