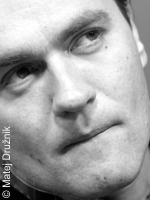 Jurij Hudolin, born in 1973 in Ljubljana, studied Comparative philology and Serbo-Croatian. He has worked as a freelance author and translator since 1995. He was the Editor of the literary journal Apokalipsa and Editor-in-chief of the publishing company VBZ. Jurij Hudolin’s translations include Miljenko Jergović, Drago Glamuzina, Igor Štiks, Zoran Ferić, Branko Čegec, Mile Stojić, Jasmin Imamović, Pavle Goranović, Lucija Stamač, Simo Mraović, Robert Perišić, Miroslav Mičanović, Krešimir Bagić, and others. He was also the Editor of anthologies of recent Croatian, Serbian, and Bosnian poetry. He published several lyric anthologies, two novels, one column-collection, and was the co-author of two screen-plays. His works have been translated into Croatian, Serbian, Macedonian, Czech, and English. Translations of his texts have appeared in magazines in over twenty languages.