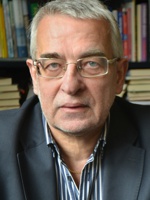 Ljubomir Iliev, born in 1949, has been translating German language literature to Bulgarian since 35 years. After his jobs as a university assistant (1975–1979) and as an editor (1980–1985), assistant of the head editor (1985–1989) and the head editor (1990–1991) of the magazine Panorama, specialized in foreign literatures, the Germanist from Sofia has devoted his attention alone o translation. His focus is on the German classics: the plays from Schiller, Lessing’s Nathan the Wise, and especially Goethe’s Faust I & II are prominent milestones of his work as a translator. For his achievements as a translator, he received already for four times the Prize of the Bulgarian Translators’ Union as well as two national translators’ prizes “Christo G. Danov”. In 2011, he received the Austrian State Prize for literary translation. Ljubomir Iliev is a member of the executive board oft he European Translators’ Collegium in Straelen and the member of the Goethe Society in Weimar.