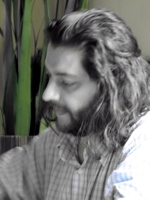 Igor Isakovski, born in 1970 in Skopje, is a writer and translator. He studied General and Comparative Literature in Skopje and Gender and Culture Studies at the Central European University in Budapest. From 1991-2003 he worked as a TV and radio moderator at various Macedonian TV stations. Igor Isakovski is the founder and manager of the cultural organisation Blesok, where as editor and webmaster he designs the online magazine of the same name. He also works as editor at the magazine of the independent Macedonian writer Naše pismo. He has translated many books from English, Serbian, Croatian, Bosnian and Slovenian. His works have been published in the USA, the Netherlands, Slovenia, Serbia, Montenegro, Croatia, Australia, Bulgaria, Hungary, Slovakia, Israel, Great Britain and Poland. Igor Isakovski died 2014 in Skopje.