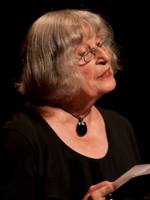 Nora Iuga was born in 1931 in Bucharest and studied there German language and literature at the Faculty of Philology. She was a German teacher in Sibiu, a librarian, and an editor at the German-language newspaper Volk und Kultur. Since 1986, she has been living as a freelance writer and translator in Bucharest. She published numerous books of poetry and several novels. She translated many important works from German to Romanian, such as Die Blechtrommel by Günter Grass, Herztier, Der Fuchs war damals schon der Jäger and Im Haarknoten wohnt eine Dame by Herta Müller and Die Klavierspielerin by Elfriede Jelinek. For her work as a writer, Nora Iuga received several awards by the Romanian Writers‘ Association.