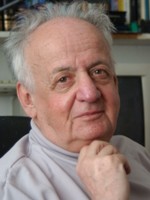 Ivan Ivanji, writer and translator, was born in 1929 in Zrenjanin (Serbia), the son of Jewish parents. From March 1944 to April 1945 he was a prisoner in the concentration camps of Auschwitz and Buchenwald. After the war he studied German Language and Literature in Belgrade. He worked as a teacher, journalist, reader, dramatist, director of several Belgrade theatres, counsellor of embassy in Bonn, employee of the Yugoslavian Foreign Office and was an interpreter of Tito and of the Yugoslavian executive and party leadership. From 1982 to 1988 he was General Secretary of the Yugoslavian Writers’ Association. Ivan Ivanji has been published since 1951, firstly in Serbian, then in German. He has translated works from German into Serbian by Günter Grass, Heinrich Böll, Bertolt Brecht, Milo Dor, Karl Jaspers, and from Serbian into German: Danilo Kiš, David Albahari and Vidosav Srevanović. He has lived in Vienna and Belgrade since 1992.