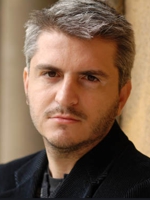 Vladimir Jankovski, born in 1977 in Skopje, has graduated in General and Comparative literature at the Faculty of Philology „Blaze Koneski“ in Skopje. He has been working as editor in several publishing houses. He is author of two novels, two books of photo-essays and a book of conversations with Macedonian writer Vlada Urosević. For his 2015 novel Invisible Loves, he has been awarded with “Racinovo Priznanie” award for the best prose book and was the Macedonian representative for the international “Balkanika” award. As a literary translator, he has translated more than 20 books from Bosnian, Croatian, and Serbian languages, among others works by Drubravka Ugresić, Miljenko Jergović, Robert Perisić, Viktor Ivančić, Goran Tribuson, and Muharem Bazdulj.