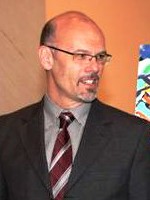 Andy Jelčić, born in 1958 in Ogulin, Croatia, studied German and English Studies in Zagreb and Münster. He finished the studies in 1982 in Zagreb where he began the postgraduate study of literary theory and concluded it with a Master’s thesis. Andy Jelčić worked as a German teacher at a secondary school in Zagreb, specialized in languages. He has been a freelance translator, writer, and publicist since 1988. He has presented many papers at seminars and has been an active member of the Croatian Literary Translators’ Association as well as a frequent jury member for various awards. For TRADUKI, he lead translation workshops in Sarajevo and Cetate. He has translated, among others, works by Erich Auerbach, Ulrich Beck, Jürgen Habermas, Robert Musil, F.S. Fitzgerald and W. Shakespeare. Prizes and Grants: Award of the Croatian Translators’ Association for the best non-fiction translation of 2004 (Auerbach), Croatian National Prize for the best translation of 2008 (Musil), Fellowship of the Goethe Institute Dresden (2011), “Schritte” Fellowship of the LCB Berlin (2012).