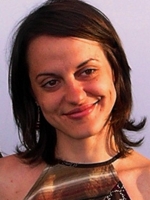 Kalina Jordanova was born in 1978 in Lovech (Bulgaria). She studied psychology at St. Clement of Ohrid University of Sofia, and completed her master’s degree in Central and Southeastern European Studies at University College London. She currently works in Sofia as a psychotherapist in Sofia, where she treats victims of torture, domestic violence, and human trafficking.

Kalina Jordanova has published several essays on the transmission and manifestation of traumas in those Bulgarians who have survived forced labour. She translates from Serbian and English into Bulgarian. She has recently been working on the translation of the novel “Kandže” [The Claws] by Marko Vidojković.