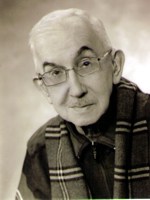 Vital Klabus, (1932-2016) was born in Škofja Loka and studied Comparative Literature in Ljubljana. From 1962-1992 he worked as one of two Chief Editors at the Državna založba Slovenije publishing company. He writes literary criticism and other essays and translates from German, French and English into Slovenian. As a translator he has twice received the “Sovretova nagrada” Prize, awarded by the Slovenian Writers’ Association. Vital Klabus has translated many novels (including those by Alfred Döblin, Hermann Hesse, Stefan Zweig, Peter Handke, Max Frisch, André Gide, Jean-Paul Sartre, Louis Aragon, Michel Butor and Patrick White) as well as a range of philosophical and academic works.