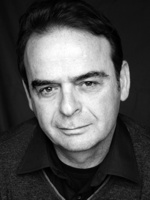 Ardian Klosi, born in 1957 in Tirana, studied Albanian in Tirana and German and Comparative Literature in Innsbruck, where he gained his doctorate in 1990. From 1990-1993 he became involved in the student movement and the new free press in Albania. He then lived in Munich and returned to his homeland in 1998, where he has run the “Robert Schwartz” German-Albanian Cultural Society since 2004. Ardian Klosi has published numerous studies, articles and books and has translated a range of authors into Albanian, including Franz Kafka, Bertolt Brecht, Heinrich Böll, Friedrich Dürrenmatt, Max Frisch, Mark Twain, Georg Büchner, Ernest Gellner and François Pouqueville. Prizes include: “Kult” for the best non-fiction book of 2005 (Netët Pellazgjike te Karl Reinholdit) [Karl Reinhold’s Pelasgic Nights], “Best translator of 2008”.