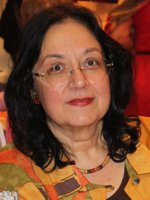 Mariana-Virginia Lãzãrescu, born in 1953 in Brașov/Kronstadt, studied German and Romance philology at the University of Bucharest. After completing her studies, she worked as a translator and later on became an Assistant at the Foreign Language Department of the University of Structural Engineering. In 1992 she became an Assistant Professor at the Faculty of Foreign Languages of the University of Bucharest. In 1999 she completed her PhD; starting the following year she began work as an adjunct professor. Since 2009 Mariana-Virginia Lãzãrescu is a professor at the Department of Germanic Languages and Literature. She has received several grants and has spent numerous research residencies abroad. She has worked as a guest professor in Berlin, Bergamo, Turin, Vienna, and Nysa/Neisse, and is a guest at international research conferences and congresses. She is a member of a number of German philology associations. Since 2010 she is also the vice president of the Central European Association of German Philology (MGV). In 2000 she was the recipient of the Translation Prize awarded to her by the Romanian Writers’ Association.