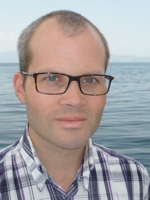 Benjamin Langer, born in 1976 in Erlangen, studied German language and literature and art history in Bamberg and Budapest. From 2005 to 2006, and from 2006 to 2009, he was a German lecturer at the St. Cyril and Methodius University of Skopje, first through Robert Bosch Foundation and then through DAAD (German Exchange Program for Academics. Since then, Benjamin Langer has been living with his family in Berlin. He is lecturer at the Institute for German and Holland Philology at the Free University of Berlin, teaches German as a foreign language and translates Macedonian literature to German, including works of Goce Smilevski, Vlada Urošević, Venko Andonovski, Vladimir Martinovski, Robert Alagjozovski und Igor Isakovski.