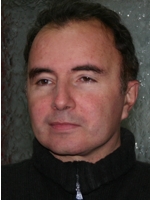 Ermis Lafazanovski, born in 1961 in Cluj (Romania), studied at the Philological Faculty, Skopje. He is a member of the Macedonian Writers’ Association and PEN Centre and has published several volumes of short stories and novels. His works have been translated into various languages. In 2001 he received the Stale Popov Prize of the Macedonian Writers’ Association for the novel Опишувач [Describer] and in 2003 the “Prose Masters” award for the novel Роман за оружjето [The Novel About Weapons]. His novel Храпешко was nominated in 2006 as the Macedonian contribution for the ‘Balkanika’ award. Ermis Lafazanovski lives and works in Skopje.