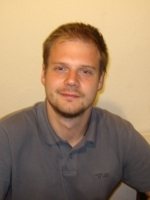 Jan Krasni was born in Belgrade in 1984. After completing studies at the “Stanković” music grammar school he studied German Language and Literature at the Universities of Belgrade and Rostock and Media Studies at the University of Konstanz. So far he has translated, jointly with Zlatko Krasni, some poetry volumes by Michael Speier, Danube Genes and others (Meridijani, Smederevo 2008.) and by Kito Lorenc Other language, (Zlatni ključ Smedereva, Smederevo 2008.), which was awarded the “Golden Key of Smederevo” prize. In addition he has translated the so far unpublished book by Georg von Hübbenet 35 Years a sub-tenant of socialism (Informatika, Belgrade, planned for 2010).

Together with Joachim Dethlefs, he has translated into German the poems of Duška Vrhovac, (Internet publication, 2007.) and The Confession of Alina Worobejewa by Dragan Mijailović. Together with Zlatko Krasni he prepared the Serbian edition of the Austrian literary magazine Podium and translated contributions (September 2009).

Since October 2009 Krasni has been a lecturer in the Languages Faculty in Belgrade.