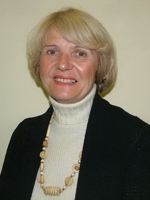 Spomenka Krajčević was born in 1949 in Belgrade. She studied comparative literature and finished the postgraduate studies with the master thesis on the structure of Max Frisch novels. From 1974 to 1999, she worked for the Yugoslav news agency Tanjug, first as a translator and then as an editor in the department for economy. In that period, she was also active for the children’s magazine TIK-TAK. From 1999 to 2004, she was an editor at the publishing house Draganić and the editor-in-chief of children’s magazines Veliko Dvorište and Malo Dvorište. Since 2004, Spomenka Krajčević has been working as a freelance translator. She has translated works of Bernhard Schlink, Elias Canetti, Max Frisch, Marlen Haushofer, Martin Suter, Christine Nöstlinger, Michael Ende, Paul Maar and James Krüss. For her translation of the book Austerlitz by W. G. Sebald she received the Miloš Djurić Prize, which is the most prominent award for literary translators in Serbia. As a writer, she published two books for children and three for adults.