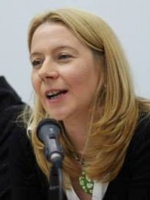 Dr. Jelena Kostić-Tomović (1973) studied German studies in Belgrade and Göttingen. She obtained her PhD at the Faculty of Philology in Belgrade (2007) in the field of German linguistics and translation theory. Since 1999, she has been working at the Faculty of Philology in Belgrade where she was appointed as a professor of German linguistics in 2013. She published many scientific articles and a monograph on word formation in modern German language. In 2010, she was elected as the president of the Belgrade Goethe Society. Since 2000, she has been working as a translator and conference interpreter. She is member of the Serbian association of conference interpreters (ACIS/DSKPS). Her important literary translations are the works Die Liebhaberinnen and Krankheit oder Moderne Frauen by E. Jelinek, Die Antigone des Sophokles by B. Brecht, Lulu by F. Wedekind, Feuergesicht and Parasiten by M. von Mayenburg, Push up 1-3 by R. Schimmelpfennig, and Unter Eis by F. Richter.